×
Go to content
We honeymooned on " On Safari" back in September 1963.  Our wedding date was 21st September and we sailed from Oulton Broad on same date for 1 week. We arrived at the boatyard in the late evening after the wedding on 21st September 1963. My best man dropped us off before heading for London so our first evening was spent tied up alongside.
Our second evening was quite funny as we found a quiet little inlet to tie up for the evening as one does. However the following morning we found it was very peaceful until we checked outside and found we were high and dry until the tide came in which created much jollity amongst the 'crew'.
Our little boat did not have a full opening cockpit. All it had was a sliding/pull back roof opening.  I had to slide the roof back and stand up as we crossed Breydon Water heading from Lowestoft topwards Yarmouth in a thick mist followed by another 2 cruisers and a timber boat heading for the sea. I was eating a cheese and pickle sandwich at the time.....
Flash forward to 54 years later, Captain and crew (Eric and Marian) are still together....and are wondering "Little boat, little boat,... Wherefore art thou now?".....
Having contacted HSBC (the Hampton Safari Boat Club that is, not the bank!) we think the boat was most likely S875 - "On Safari", a Hampton 22 which matches the illustration on the catalogue fragment that I retained for the last 54 years. (Editors Note: Our thanks as ever to Craig Slawson as his database) come to the rescue yet again!). 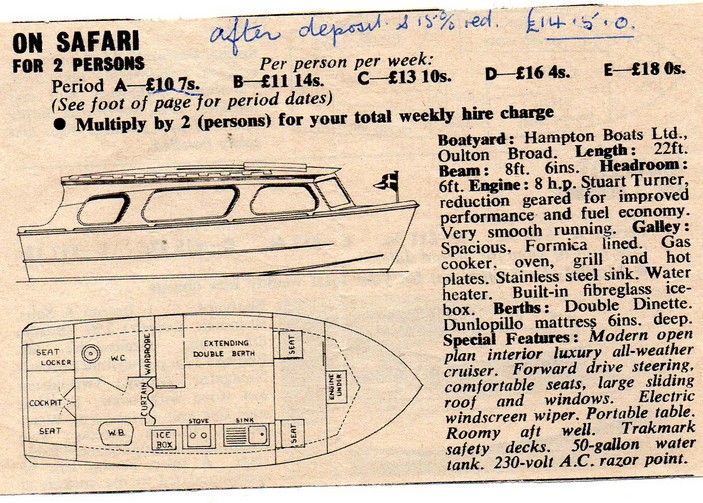 The pricing details were scribbled on the catalogue at the time of booking. I wasn't earning £14 a week at the rolling mills then. My mortgage was £6.12s per month on a 3 bedroom terrace house costing £910. My, how things have changed.....
Our thanks to Eric and Marian for this interesting flashback to 1963, an eventful year that also included:
Our warmest congratulations to Eric and Marian on achieving 54 years together
and with hopefully many more yet to come!
Postscript:
DOES ANYONE "OUT THERE" KNOW WHAT BECAME OF S875 "On Safari " AFTER  2006?
Back to content