×
Go to content
The Three Rivers Race
The Three Rivers Race organised by Horning Sailing Club and now sponsored by Yachtmaster Insurance Services. Was first run in 1961 and the race this year, 2022, was the 61st race in the series.
Run over 24 hours, it is recognised as one of the toughest endurance races in Europe, with over 100 sailors from all over world travelling to Horning to take part. In 2014 The Three Rivers Race was nominated the third toughest mass-participation event in the UK in recognition of the many obstacles faced by competitors including three bridges to be negotiated involving lowering the mast and sails for each,  frequent lack of wind during the night, and   hire cruisers during the day!.
The course is 50 miles long, and some 15 different classes are eligible to take part with compwe3titors making their own individual decisions as to which order to round the four turning points and all are given a maximum of 24 hours to complete the course.  Competitors’ decisions involve a lot of tactical planning to work out the best way to take advantage of the tides in order to get around all the turning points as quickly as possible.
Each turning point is allocated a “Guard ship” and crew who monitor and record the progress of each individual competitor when they round the turning point (marked with a large buoy including a flashing light during the hours of darkness) Each Guard ship crew is also provided with a “rescue boat” (in the shape of a Dory or RIB which can quickly be deployed should the a competitor get into trouble 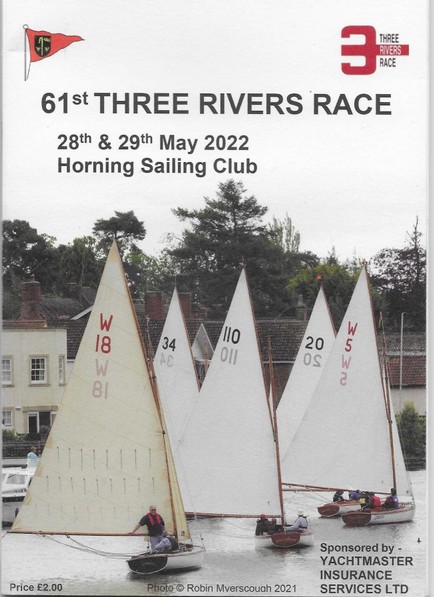 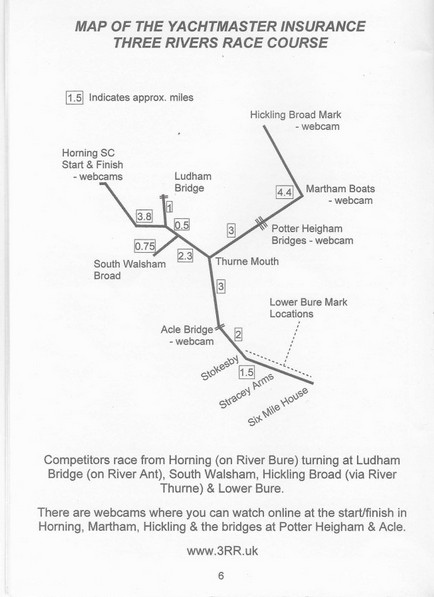 The Guard ship at the turning point in South Walsham Broad, “Elsa II”  was provided by myself as Commodore of the Merchant Navy Association Boat Club and crewed by me and Paul Battagliola the Club’s vice-commodore and Lois Edwards, another MNA Boat Club member. Plus Alix an elderly Westie and Fudge an 8 month old  Cockerpoo puppy…
We got to our location in South Walsham Broad on the Saturday morning about an hour before the start of the race laid our turning point buoy about 200m  inside South Walsham Broad and moored ourselves, and our rescue Dory,   about 100m away at the head of the Fleet Dyke leading from the River Bure into the Broad where competitors had to pass with about 50m of use so we could readily read their sail numbers,  get their race number and record the exact time they rounded the turning point and the3n communicate this information by VHF radio to Race Control at Horning on a regular basis every half a dozen or so boats.

With a fresh breeze from the north-west the first competitors rounded our mark  at around 11.45 and from that time on we were kept busy with a steady stream of boats throughout the day and evening until darkness fell around 22.00 hours when only a dozen or so more boats were logged before everything went strangely quiet until just before 05.00 when more boasts started to arrive at intervals of about five minutes until 07.30 when there were less than a dozen boats left to visit us – By 09.00 that number had dwindled to just two. One of which subsequently retired leaving us waiting for what seemed like ages but was actually only about 40 minutes for the very last boat!
By about 09.30 we were able to use the Dory to recover our marker buoy and head back to Horning Sailing Club but just as we turned into the River Bure we came across a competitor’s large sailing cruise with her sails set and her bow buried firmly in the reeds along the river bank! There appeared to be no-one on board but we agreed with Race Control at Horning that the situation warranted investigation so we duly got as near to the yacht as we could without running aground and by means of our horn and quite a lot of shouting we eventually got a very sleepy response from a member of the yachts crew as following their earlier retirement they decided to run into the reeds and catch up on some sleep!
So all was well but ours was not the only Guard ship to have ended up investigating this boat and we suggested to Race Control that competitors ought to be required to carry an “OK Board” to display if they have dropped out or stopped for any reason NOT requiring assistance as this would leave the guard ships and their rescue Dory free of distractions and thus able to concentrate their resources on potentially more serious incidents; in fact competitors are advised in the regulations to inform Race Control if they drop out but not everyone carries a radio so an OK Board would probably be just as appropriate and more likely to be used.
We were hugely impressed by the organisation and the welcome provided for support crews such as ourselves by the whole of the 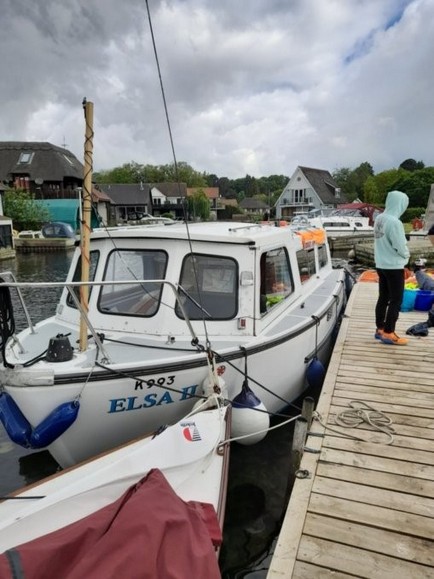 Horning Sailing Club Three Rivers Race (3RR) team and by members of the Club not directly involved with the race at all, to such an extent that since my wife and I now confine our boating almost exclusively to the Broads we are very seriously thinking of joining the Club ourselves!
Clive Edwards